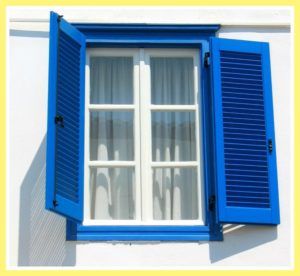 If you are going to prep and repaint a window and it is stuck or difficult to open the first thing you will want to do is inspect it inside and out to determine why it isn’t opening properly. Most of the time the window has been “painted shut” from the outside. Whether it has been painted shut from the inside or outside, the fix is the same. Use a putty knife, not a razor blade or sharp knife, and work it into the seam between the window and the frame. Use the putty knife as you would a regular knife to “cut” the window from the frame. Usually you will need to run the putty knife the length of the window, top to bottom.

Another reason a window may stick is because of something called blocking. Blocking is the tendency of dried latex paint to want to stick to itself. The best cure for this is a painter secret Briwax. Just rub a small amount on the two surfaces where they will meet. This is also great stuff to use on the track of double hung windows or in the pocket and gear levers of a casement window.

Most windows have many parts and added hardware. One key to a successful job when painting windows is to remove as much hardware as possible. Make the job as easy as possible by removing as many obstacles as you can. It is well worth the investment in time.

Many windows can easily be taken out from the frame by simply removing a few screws on casement windows or pushing in on the track and pulling out on the window if it is a double hung. Older double hung windows usually have a cord attached to them and are not designed to be easily removed.

Weather stripping is also something that should be removed if you can do so easily. Don’t forget to reinstall it when done!! If it can’t be removed, mask it off and clean it when done (if necessary) with a solvent.

When painting windows you want to follow the same procedures as when finishing woodwork. Sand, prime and paint using high quality coatings. An often missed area on windows is the outer edge of the window where it fits into the frame. All four sides, top-bottom-left-right. These areas should be sealed to avoid damage to the window and frame. I suggest not using paint on these areas as it will be an area subject to blocking and often the build up in mils by painting makes for a tight fit. I like to use straight penetrol on the bare wood. it seals very well and is a thin mil coating.

Scraping glass as opposed to masking it is usually the way to go. The exception is when dealing with old glass or thin fragile glass, mask it! When scraping glass always use a new, sharp razor blade. Wet the area to be scraped and use lite pressure.