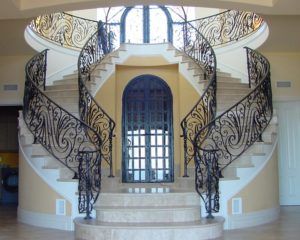 Whether brushed, rolled or sprayed the trick to a lasting finish is proper prep work and selecting the right coatings for the job.

Step 1. Power wash it. When dealing with ironwork I recommend also using a small scrub brush. You are going to want to use a good cleaner. I like Simple Green. The goal is to remove all dirt, debris, moss and mold. When power washing, remember you are going to be painting in that area as well so blow all the debris away from your work area.

Step 2. Deal with the rust. You can do basically 3 things. Use chemicals, sandblast, wire brush/sand.  I will also mention a tip below that works well for us. If using chemicals, you are either going to use a chemical rust remover or a chemical rust converter. A rust remover is as it states. It breaks the bond of the iron oxide (rust) to allow removal from the metal. A chemical rust converter uses a tannic acid to convert the iron oxide to iron tannate. An inert form that you can then paint. You can always spot a converter because it turns the rust black. Sandblasting is very effective but should be left to the professionals. Wire brushing and sanding is very effective but can be time consuming.

Step 3. Prime. There are lots of schools of thought when it comes to primer for Iron. There are oils and latex varieties. DTM (direct to metal ) coatings. Zinc primers. Both Zinc chromate and zinc phosphate. Red oxide primers, etc… Everyone has there own idea about how to deal with the primer question. Some people do a zinc chromate  to deter corrosion followed by a red oxide to seal and promote adhesion. I would suggest doing none of these. Here is the tip.

Penetrol. What we do is clean the metal thoroughly followed by sanding and wire brushing. We then coat the iron with penetrol. We allow this to dry 24 hours and then do 2 coats of a oil DTM coating. We spray it of course. This system works great and as I mentioned in a previous post, we did this to an exterior stairway and it looked great 15 years later. I talked to someone at the company that makes penetrol one time long ago and they told me that treating metal was something they marketed the product for many years ago and it use to be on the label as a metal treatment before painting. I never got a straight answer as to why they stopped marketing it that way. Penetrol has high adhesion and it creates a barrier that keeps oxygen and moisture from reaching the metal.

When painting decorative ironwork one of the things to remember is that rust often starts in areas that you don’t see. Pay special attention to the underside of railings. A urethane caulk around the base of rails going into concrete also helps seal out water and prevent rust and corrosion.

The success of the paint job is based on the amount of time spent on getting the metal ready to finish coat.