Have you ever been to someone’s home and noticed how clean and neat it is. Maybe super neat? It probably goes beyond organization and leans toward minimalism. The term minimalism is used to describe a focus in architecture and design where the subject is reduced to its necessary elements. Minimalist design.

I strive to be organized and neat but I can’t help but be a little jealous when in one of these super neat/organized homes. I was just in such a home doing an estimate and wow it was great. I figured “well they probably don’t have any kids”. I spend a lot of time picking up behind mine. Then the mom came home with a kid in tow. Argh!!!

So anyhow the idea with minimalist design is the whole “less is more” idea. The idea became popular in the 1980’s in New York and London.

In a living room you might have a couch a table and one or two pictures on the wall and maybe a big plant in the corner; that’s about it. There is lots of open space. No clutter. No stacks of magazines on a table and a big pile of unfolded laundry on the couch.

The open space and order creates an impression of simplicity and calmness. 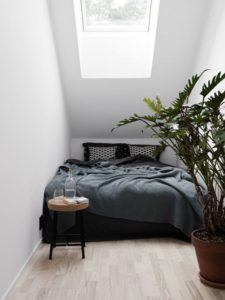 One of the nice things with this style concept is that you can really highlight architectural features with different paints and stains. The walls aren’t hidden behind mountains of bookshelves.

There are lots of books and blogs with this theme in mind. I am posting links to several of them on my twitter  page so if this is something you find appealing, that is a good place to follow and get some great ideas and inspiration.

I have also found some good sites and books on organization and dealing with all the clutter which I will be posting there as well.