Certain situations call for the “big guns”. High Performance Coatings. Occasionally the need is residential but for the most part the application is in a commercial or industrial environment.

For the past several months we have been on a commercial remodeling project and as part of that a steel canopy was erected at the front of the building. Uncoated steel in an exterior environment needs the good stuff !

We submitted specifications for a 2 component epoxy primer followed by a 2 component aliphatic polyurethane. This is the most bang for the buck. Difficult to work with but performs very well.

The steel was dirty but fortunately there was no mill oil to deal with. Mill oil is a lubricant used in the manufacturing process. It has to be removed, usually with a solvent, prior to painting.

Since both the primer and top coat are 2 component you have to keep your eye on several factors. Induction time, pot life, temperature, etc. We had a one hour window to use the primer and get it out of the pump before it set up and a two hour window for the top coat. You do not want this stuff setting up while in your sprayer. We always factor in new hoses and filters and toss them after the job is complete. No matter how much you flush your pump it always seems like there is enough residual material in the hose that when you try to use it again it is like squirting out tooth paste before it gets plugged up.

High performance coatings are often difficult to work with but worth the trouble in performance.

Painting In The Dewpoint

If you make the mistake of painting within this zone of temperature, it’s a potential delayed disaster. I call it a delayed disaster because often the damage isn’t obvious. Your home will look great until the following year as the seasons and temperatures change. By then your paint contractor may be long gone.

So what exactly happens? As your home is being painted, if the temperatures drop within the dewpoint, moisture forms on the siding, gutters, etc. and this film of moisture doesn’t allow the film of paint to properly adhere to the surface.

Everything will look great but the paint is not actually adhered to the surface of your siding for example.

In the spring/summer as the temperatures warm up and we begin to get rain the paint film will naturally pull away from the surface. Sometimes it will pull away and go back flat several times before paint film eventually breaks. It is very strange to see. Sometimes you can see a house where one side is covered with bubbles in the morning and by evening, as the sun beats down on the surface, the bubbles disappear. I have also seen the bubble tear slightly and fill with water. Then you have all these strange water balloons on the side of your home.

Putty in the hands of someone that doesn’t know what they are doing is a disaster. We are talking about wood putty not silly putty! Side note: I loved silly putty as a kid.

To begin with, stainable wood putty never stains the same as the wood it is on. I’ve never met a paint contractor that uses it. Professionals use tinted putty and most importantly never use it until the wood has been stained and has at least one coat of sealer on it. 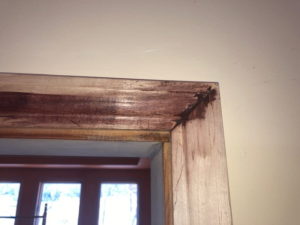 Occasionally we have to use an artists brush and stain the putty a bit to help blend it to the wood and then we seal it.

These photos are from a residential job where a lot of money was spent on new trim. A “non professional” applied wood putty to the miter joints before we were on site. Long story short, it all had to be removed and replaced. Expensive mistake! We knew the putty would not look right but stained some of it to prove the point and show the homeowner the disaster that had befallen them. These were really bad miter joints too by the way.

The defense from the putty applicator was that “it says it’s stainable”. Stainable yes. Matching the wood stainable? No.

Dry brushing stain in this case was used to darken and highlight the grain on hand stained and wiped maple. The customer had factory finished cabinets and  they wanted us to match that finish on new trim/doors and on a custom staircase.

Maple is a softwood so first it needed to be sanded and preconditioned. You usually want to precondition any soft wood prior to staining to achieve a uniform appearance. The “softer” areas of the wood soak up the preconditioner and this help to achieve a more uniform finished piece. 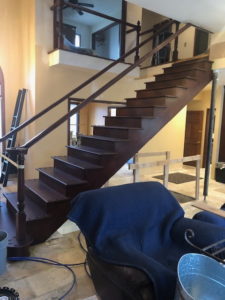 We make our own preconditioner on site and adjust the formula accordingly. We then sanded again and hand stained the wood using pieces of sheep skin. Once stained and dry we dry brushed additional stain to achieve the desired look. Often if you try to wipe stain a second time you will “wake up” the original coat of stain and actually remove stain from the wood rather then add to it.

Skim coating a wall is not too difficult. A little time and practice, and the right tools, will make you a pro in no time. The reason a wall is skim coated is usually because of an imperfection in the wall or damage to the wall from the removal of wallpaper for example.

It always a good idea to start by sealing the wall with an oil based primer. This is critical if wallpaper was removed from the wall. The water content in drywall mud will cause old wallpaper glue to come loose from the wall and create a mess. It’s a good habit to always seal the wall to be safe.

The faster method of skim coating is to mix the drywall mud with enough water to make it rollable. Once the mud is mixed you simply roll the mud on the wall and knife or blade it down. A slower method is to use straight drywall mud and knife or trowel it on the wall. The reason you may want to go the slower route is if there is a problem with having additional water content in the mud. 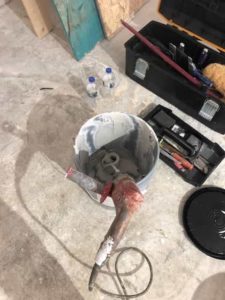 These photos are from a commercial job where we did oil seal the wall and then rolled a coat of mud only to discover before the second coat of mud that there was a second layer of wallpaper that was painted over and the oil primer was not enough to keep some of it from bubbling up. When this happens you simply cut out the bubble areas, reseal and mud again.

On this job we sanded the walls smooth, cut out the bubbles, oil primed the entire wall and the second coat of mud was knifed on to keep the water content down. Just to be safe.

It ended up being perfect once it was top coated with finish.